Friday May 1st saw us back in Brisbane.

Rain had once again washed out earthmoving operations at South Callandoon farm.

Geoff, the Gore Earthmoving supervisor, called it too wet at 10.am and we were on the road by 11.30am. We cleaned up the kitchen, washed the floors and tidied up after the guys had all packed up and left and then we packed up ourselves, booked the unit up the coast for the weekend, and away we went.

Our plan was for Chris to drop me off at Karen’s place as it just happened to be the girl’s night out. I would stay there the night and Chris would go over and stay at Barry’s place and catch up with him.
We had the wipers on all the way from Goondiwindi and from Warwick the wipers were on full. It poured non stop.

We managed to hit Brisbane at the same time as the massive, slow moving storm hindering and even stopping, our plans.
It just proved impossible to get through the north side to stay at Karen’s.

Road closures, rapidly running creeks, swollen rivers and drains were all overflowing causing massive traffic delays. Sadly a lot of cars went under water and there were a number of fatalities as people tried to drive through overflowing water courses.

After three hours trying to get across Brisbane we ended up doing an about face and driving back to the south side to Barry’s place where we stayed the night. There were some road closures on the south side as well but they didn’t receive as much rain as the north side so things weren’t as bad. Goondiwindi got 35mm of rain for the day on the Friday but Caboolture got 233mm in a few hours.

Saturday morning was cloud free. What a difference a few hours make.
Chris and I left early to drive up the coast to the unit hoping to beat the traffic and hopefully avoid any road closures.
Apart from the south bound traffic still using the north bound lane on the Bruce Highway at Morayfield our trip up the coast was uneventful.

For the next couple of days the weather was perfect, warm enough to go swimming everyday with amazing sunrises and sunsets. The sunrises were spectacular every morning. The view from the unit always takes our breath away.

We got to attend Lish’s 30th Birthday party where Ashley gave a lovely speech and even managed to get Lish a surprise birthday present that she didn’t know about. A few pictures of the evening. The cake was done especially for her by one of her friends. Emily came up and stayed a couple of nights at the unit where we were able to catch up with her before she sets off back to New York to meet up with Rodney again.
Kealy, Emily’s oldest and most faithful friend from school spent a night with us also.
We love having her visit us and it’s always a pleasure catching up with her.
Amidst all the laughter and jokes it’s hard to see these girls as grown women, drinking, talking marriage, working and buying their own homes. Where does the time go? It probably doesn’t help that Kealy is 5ft and still wears kids clothes? At 22yrs old she still has to show ID to get water at the bar! A bed with a view for Emily. Really was the best bed in the unit.

We got a phone call from Geoff, the supervisor, that the Earthmovers wouldn’t start back at work until Friday so we added another couple of days on at the unit so we could catch up with David.

I took Elliana to the Australian Zoo where we went and saw the Lemurs at Bindi’s Island. Elliana has great eyesight and usually spots the animals quicker than I do. Of course we had to stop at the Kangaroos and Koalas for a pat. Elli is getting more and more adventurous with the animals everytime we go there. This time she was checking out the kangaroos ears and has no fear of going up to them. More adventurous every time. What does his ears do?

I ended up going again with David and Lacey to see the Tiger show. Next time we’ll go a bit earlier as we now know where the best seats are to see the show easily. You gotta LOVE those annual passes.

We ended up coming back to South Callandoon on Wednesday.

The Earthmovers started work Friday after having a week off.
It never rained much while we were at Belah Park but here we seem to have 4-7 days off every 10 days at the moment.
In the 6 ½ Weeks we’ve been here we’ve only had I full weeks wage.
This doesn’t bother us as we are getting a lot of work done.

It’s raining again as I’m writing this blog, two weeks after coming back from the coast. The boys will be off again until Monday at this stage (unless it doesn’t stop raining). We’re not going home this time but might drive up to see Shannon at Emmaville over the weekend. 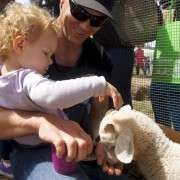 Catching up with Family

Our first couple of weeks at South Callandoon: