2:30am this morning saw us on the road to the Nissan dealer at Rockhampton to get the problem of the constantly illuminated dashboard warning light attened to.

Driving at about 70kph, just as the vehicle handbook advises under the circumstances, we passed through the towns of Thangool, Biloela and Dululu in the darkness.

Just as the first rays of light heralded the coming new day ANOTHER warning light illuminated the dashboard.

Pulling over to consult the handbook we discovered that whilst the FIRST light indicated the need to drive at under 70kph this SECOND light required us to drive at 110 kph with high acceleration to increase the load so a “burnout” of the catalectic converter could take place!

You had to laugh at the absurdity of the predicament.

So off we went at 100kph heading for Rockhampton again.

We pulled into Rocky at about 6:00am and stopped at Macca’s for a coffee after which we got back into the car to find the second warning light was now off.

The Burnout must have been successful!

One wonders if we unknowingly started any other roadside fires with this “Burnout” (see yesterday’s post).

We were the first in to the Nissan service department as it opened and after a lengthy explanation to the service reps we were told they would look at it today since that we were travelling and had left our van 250km away at Monto.

They gave us a ride to the local shopping mall where we would need to wait till they attended to the car.

Of all places to wait – a ruddy SHOPPING MALL!

And it could be ALL DAY!

I was over the place after the first walkthrough, which happened even before any shops were open.

We decided to wile away a couple of hours at the movies and Kerrie chose what I thought was a particularly abysmal movie, made even more unbearable by some snotty nose brat behind me constantly kicking the seat.

SHE of course was delighted by the pathetic acting, with delighted laughing intermingled with howling her eyes out.

The movie was “Red Dog” and I enjoyed it. He was just in a “Grumpy old man” mood, tired and at a shopping centre. There was no where he would be happy.

I don’t know what I felt most – a longing for the end of the movie or the dread of going back to the Shopping Centre.

When the movie finally ended and we emerged into the light and with Kerrie still sniffling back tears we headed for the food court to get some lunch.

I must say I was pleasantly surprised by the variety and quality of the food available which was on a par or better than any we had experienced in Melbourne, the supposed “Food Capital of Aus”.

Just as we finished lunch Nissan phoned to say they had fixed the car and the jovial old Gent who had dropped us off picked us up from the shopping centre and drove us back to the dealer.

I nearly passed out as the Service Rep, after proudly stating they had fixed the problem, handed us a bill for $570!

Sadly lamenting the departure of $570 and yet pleased to have the problem solved we head out of Rocky back towards Monto and our home.

As we hit Biloela we decided to do a drive around and grab a coffee for the rest of the 80km trip.

The only place we could find was in a small Shopping mall and we ordered a flat white coffee and a cold drink for Kerrie.

Just as we were moving off a lady came chasing us and, much perturbed, she asked if we had ordered a flat white coffee.

Yes, we had and here it was and see ya later!

“Please come back to the shop and sort it out”, she says, “they said you have the coffee that was made for me!”

Ok, so back we go back to where at least 4 people were in a heated discussion about who made what coffee and who ended up with it.

There were at least 6 staff in this coffee bar, (Kerrie and I have run far busier places by ourselves), and NO other customers except us and the poor woman who just wanted to get the coffee she’d paid for.

“Look, we bought and paid for this, that girl there served us”, I stated pointing to a young lass who’s mind was obviously on things with a much higher priority that anything to do with work, “that’s it goodbye!”

Five minutes later Biloela was in the rear view mirror.

We took in the magnificent farms on the journey towards Monto from Biloela. Wide, sprawling acres of grain fields produced a kaleidoscope of natural colours and created a marvellous visual background to the trip.

Barley Field (we think) with lucuren in the middle.

As we neared the spot where we had started the grass fires the previous day we both were startled by the sudden appearance of the SAME DAMN WARNING LIGHT ON DASHBOARD!

Now, 230 km from the Nissan dealer in Rockhampton the same light was again shining!

Oh the surge of emotion.

The new Telstra antenna allowed us to enter into communication with the service department at Nissan in Rocky who promised to “Look into it and get back to me”.

They never did, prompting me to make an irate call when we finally arrived back in Monto.

After them patiently listening to my tirade about them costing me $750.00 including the bill, the fuel cost and the painful movie, and still having same problem they referred me to the local RACQ mechanic who, if he owned a “Scan Tool”, would be able to find the problem.

Rushing off I got to the local mechanic just as he was closing shop at 5:15pm and he said he had the tool and he would do it at 8:00am in the morning.

So, another night at the Monto Caravan Park.

Turning up at 8:00am today, the most helpful RACQ mechanic does the scan and, after an hour on the phone to Nissan in Rockhampton they determine that the problem is a faulty air flow analyser.

The trouble is now that there is no replacement part in Rocky, Bundaberg, Harvey Bay or Brisbane.

The closest part is on the Gold Coast!

Between them all they are shipping the part out today and are hopeful it will be in Monto by the morning, when the RACQ mechanic will insert it and we will be on the way.

Of course it may not arrive till Saturday, but the kindly mechanic has promised to work Saturday if necessary to make the repair even though he doesn’t normally work Saturdays.

Oh, and we are advised not to use the car!

So here we are in Monto still!

After telling the story to lady in the local shop she gathers herself from trying not to laugh and states, “If I had your sort of
luck, I’d never have left Brisbane”.

Ahhh,  I thought,  but Lady you also would have missed out on the rich blessings we have been rewarded with , which I’m certain we’ll appreciate again when this saga is behind us. 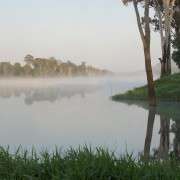 A problem with the Nissan 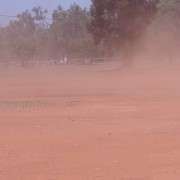 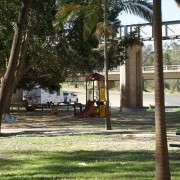 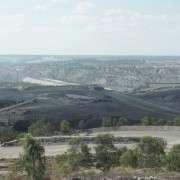 The Blair Athol Mine 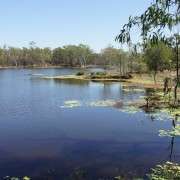 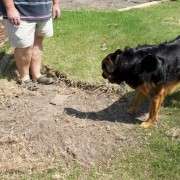 The first day back on the road
1 reply

A problem with the Nissan

The Nissan is OK.
Scroll to top